A Brief History of Bekins 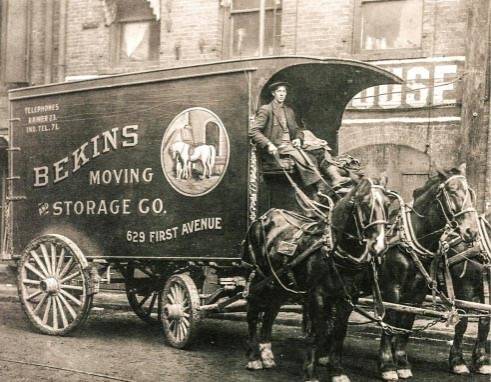 Did you know that Bekins Kelowna is part of the oldest and largest moving company franchise in North America? From the early days of hauling household goods by horse and carriage - to today’s fleet of more than 1,200 trucks and 300 locations (including here in Kelowna, BC), Bekins has come a long way. Learn about our humble beginnings and where we are today, providing the Okanagan, BC, and Canada with trusted and reliable moving and storage services.

Back then, Bekins averaged one-to-two moves per day. Compared to the more than 1,000 moves it conducts today. However, that would soon change as the company began to expand west to Los Angeles, Omaha, and Chicago.

A History of Firsts

Not only did Bekins become the first company to specialize in moving household goods, but it also introduced the very first motorized moving vans to the west coast way back in 1903. The original fleet consisted of two trucks powered by two-cylinder, air-cooled engines.

Another first for the company was the reinforced steel and concrete warehouse they built for storing household goods.

1903 was a big year for Bekins, as that is when it opened its first office in the Pacific Northwest, Seattle to be exact.

Twenty-one years later, Bekins opened its first Canadian office in Vancouver’s Sun Building (now home to the Vancouver Sun newspaper). Which, at the time, was the tallest building in the British Commonwealth. Over the next decade, Bekins would establish Western Canada’s first fleet of motorized moving vehicles. Back then, Bekins’ drivers knew how to navigate some pretty rough mountainous roads, and they still do to this day!

With an already established reputation with its Vancouver operations, Bekins eventually partnered with Canada’s largest van line, United Van Lines, to offer exceptional long-distance moving experiences across Canada and North America. In 1997, Bekins Worldwide established to provide overseas moving and freight services to and from more than 30 countries around the World.

The company also moved its Canadian headquarters to a state-of-the-art facility in Surrey. Then they opened five other BC branch offices in Victoria, Parksville/Nanaimo, Campbell River, Prince George, and more recently, Kelowna.

In 2015, Nathan Miller, a Kelowna moving company independent contractor, joined the Bekins family when he shifted his company from Nathan’s Moving to Bekins Kelowna Moving and Storage.

With a growing reputation for excellent service, Bekins Kelowna now employs 35 staff, has a wide fleet of moving trucks, and operates out of a 25,000 sq. ft. warehouse at its headquarters in Kelowna. Using more than 50 pieces of moving equipment, Bekins Kelowna provides both local and long-distance moving services (including our new DIY services), storage (including storage containers and warehousing), commercial moving, specialty moving, and much more.

Needing to move your household or business to or from Kelowna? Looking for short or long-term storage? Learn about our moving and storage services and book your free estimate by contacting Bekins Kelowna.